On Saturday 13th, October 2012, we had to get up early to meet at the train station in Offenburg and to catch the train at 4.50am. After changing trains twice, we arrived at Frankfurt Intl. Airport which was way bigger than we had expected. The check-in took us one and a half hours and after that we were checked by security which scanned through our baggage and even picked one person to make additional checks for explosives. Finally we could get on the plane and start our flight to the USA. Most of us had never flown that long before so we were pretty nervous but fortunately it went better than expected, even though it lasted eleven hours and we ate cookies with glue. We also improved our English during the flight because there were many Americans on the plane that we could talk to. We arrived in Dallas Texas at 2:30 PM and the airport was even bigger than Frankfurt?s. On our second flight to Minneapolis, many GAPP students became sick because of turbulence and the glue-filled cookies. Minnesota didn?t look very good that day because of foggy weather. We were picked up by a bus and brought to the Northfield High School, where our American host families picked us up and drove us home. We were exhausted after our 28 hour-long day and finally we could get some sleep.

As one part of the exchange we visit the schools of the different country, so we wrote a little summary about American school lifeA typical school day starts just like in Germany with the way to school: The students take the bus, the car or some students that live close to school take a walk. What really caught our attention are the yellow school buses, which we know from a lot of American movies. But you don?t have to order a ticket for the bus, because you pay it by paying your income tax. But if you go to school by car, you have to pay 50 $ per year to park there. The classes are structured in a simple way: 4 lessons with 50 minutes then a break with 30 minutes for lunch and then 3 other lessons. Automatically they have little breaks, because it's not the teacher that changes the room, it is the students. They have the same lessons every day because the school year is broken up into different semesters. Another interesting thing is that a lot of people use their mobile phones or listen to music during the lessons. The teachers don't seem to care. In conclusion we can say that the lessons there aren't more simple and not as strict as our lessons.

Theresa and Linda: Report about giving the presentations

In the second week at High School, all the German students had to give presentations in English about certain things in Germany: music, the German government, German food, teen life, the Grimms? fairytales, learning German, German traditions and school life.

How we felt before giving them: We were nervous, excited and a little bit afraid that Americans could laugh about us, because of our German accent. But after a while we weren?t afraid anymore. Of course, not only the Americans learned something about our culture, we also learned more about them while talking with everyone after the presentations. But we honestly have to say that it became boring after a while. There were often the same questions and we often had to explain a lot of things which didn?t belong to our topic. But in general it was a good practice for our English. We were very happy, that all the people were very friendly and open to us!

Max, Julia and Ruth: Our Trip to the Twin Cities:

On Tuesday, we met at 8:00 o?clock am in front of Northfield High School. We were 22 Germans, and ten of the exchange partners were with us. Also there were Ms Reinkunz, Ms Kopseng and Mr Troendle. We drove with the bus to Saint Paul. It was a rainy morning and we all were a little bit tired. We arrived in St. Paul at 9:00 o?clock and we went to the Capitol, because the Minnesota History Center only opens at 10:00 o?clock. The Capitol is an amazing building. It is very big and there are two big meeting rooms. At 9:45, we went to the History Center and went in there. In the first ten minutes a woman gave us an introduction about topics in the museum. We went to three interesting themes about the "US-Dakota War of 1862?, the "Greatest Generation of Minnesota? and the "Weather Permitting?. First we went to the US-Dakota War station. It was a war between the Dakota tribe and Minnesota. There were lots of facts about the persons during the war, the several fights and the story before and after the war. The next station was the Weather Permitting. The best thing about this station was a house in which you can go. When you now pressed a button, it simulated a tornado around the house. That was really amazing. But there were also a lot of other cool things about weather. The last station was about the Greatest Generation of Minnesota. At this station there were short films about American soldiers in the second World War. There was also a simulation of a plane crash. That was really interesting. After this we left the museum at 11:45 and we went back to the bus.

After the History Museum, we took the bus again to the waterside of the Mississippi River. We had 15 minutes to have lunch there. But almost everybody had already eaten it during the bus ride. So we used the time to cross the bridge that was nearby. On that bridge, we could see the skyline of Minneapolis. There are so many skyscrapers! But we went there later. Now we went to Minneapolis by bus.
At 1 o'clock we arrived at the Minneapolis Institute of Arts. As we went into the big building, our teachers said that we had to be back at 3.30 pm. So we could walk around in the museum on our own. There were many different kinds of art, e.g. the African exhibition, the Asian and European arts or the Barock exhibition. At 3 o'clock most of us were already finished so we waited in the entrance hall or in the cafeteria of the museum. When Mr. Troendle und Ms. Reinkunz came back, we left the museum and the bus driver drove us to the Scuplture Park, where the sculpture "spoon and cherry? is situated. We spent 20 minutes there and then, finally, we went downtown. There, we had one and a half hours to look around.
Some of us went to eat a snack. Others visited Macy?s or other shops.
In Downtown Minneapolis there are many skyscrapers and some had a really exceptional architecture. And they have a great system to go from one skyscraper to another without crossing the street. There are connections between the skyscrapers like a bridge but it is a closed bridge, so you don?t have to go outside because in winter it is very cold and nobody would want to go shopping.
At 4:40 pm, we all met at the bus and we went back to Northfield. We ate there in a nice restaurant called "El Tequila?. You can eat Mexican food there, for example: Enchiladas, Tacos, and many other things?
After the meal, the parents picked us up in front of the restaurant and everybody went home.

Lukas and Moritz: Our trip to the Dells

We met at Northfield High School to start our trip to the Wisconsin Dells with a big bus, full of tired students.

After a few hours of driving a tour guide joined us and taught us about the Amish People while we drove through their lands.

We stopped at their bakery and we could buy their homemade baked goods.

The next stop was for a duck boat tour. We drove through the woods of Wisconsin and the Wisconsin River with an old 'duck' which was used in the 2nd World War.

At the Wilderness Water Park we parted ways in four groups. Every group had a big condo with a living room, a kitchen, 4 flat screen TVs, 3 bathrooms, a whirlpool, etc. After eating pizza we finally went to the Water Parks. We could visit 3 different Water Parks with lots of water slides, artificial waves and a whirlpool with warm water.

Sadly, we had just a few hours of sleep because we had to leave the Dells at 8 am the next day. On the way back to Northfield we stopped at a park with a wonderful view of the Mississippi River. We also visited the National Eagle Center in Wabasha. There, we could go very close to eagles and we also observed them while they ate lunch (a rat) during a very interesting presentation.

All in all, it was a very funny and interesting trip which was also very good for the German-American friendship.

Northfield is a bigger city than Lahr, but it only has 20 000 inhabitants. It?s located in Minnesota. Minnesota is 7 hours behind Germany. Northfield has a lot of scenery. The city is bursting with vibrant culture, esteemed academics, celebrated arts, progressive technology and a cherished history. In the center of Northfield, called downtown, there are some shops where you can buy some souvenirs and you can find a few restaurants too. The weather is nice, but a little cold. Some days, the sun shines.

On Wednesday, 24th October, we went to the Jessie James Museum in downtown Northfield. The museum is about the James-Younger robber-gang. They robbed a lot of banks all over the USA and then they wanted to rob the Northfield First National bank. But at this bank they failed, because of the teller of the bank. He was shot and gave his life for Northfield . The gang escaped and when they were found, some were killed and the others were brought to prison. The tour was interesting and funny, because the guide explained us the story with a play. So we all had a great afternoon.

The first time we heard about the hurricane was on Friday morning in the meeting with our German group (home room).

Ms. Reinkunz and Mr. Troendle told us that there was the possibility that we couldn?t go to New York.

Meteorologists assumed that the hurricane would hit between New York and Washington. Big parts of the east-coast were evacuated. In New York, 370.000 people left because of Sandy.

The atmosphere was bad that we couldn?t go to New York but on the other hand we were a little bit scared because of the storm.

On Monday evening the coast was hit by the storm.

In the evening we saw the pictures on TV and they were horrible!

The next day in the home room we talked about what we heard and saw in the evening and most of us didn?t want to go to New York anymore, because they were scared and didn?t want to see a destroyed New York.

Our teachers told us that we had two possibilities:

1. Fly to New York on Friday

They said that we would have another meeting in the sixth hour and they would try to re-schedule our flights.

Sixth hour, homeroom: We got the flight on Friday!

There were different opinions in our group. 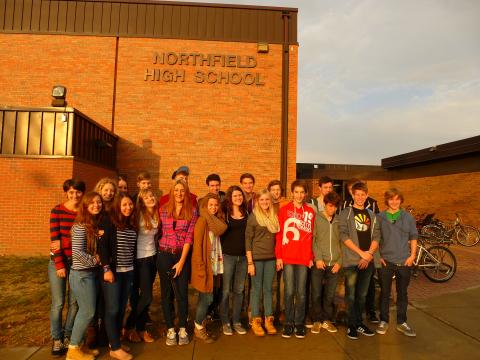 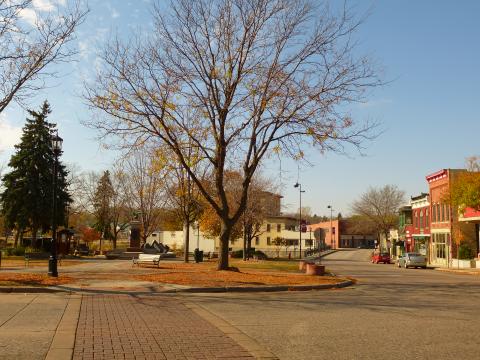 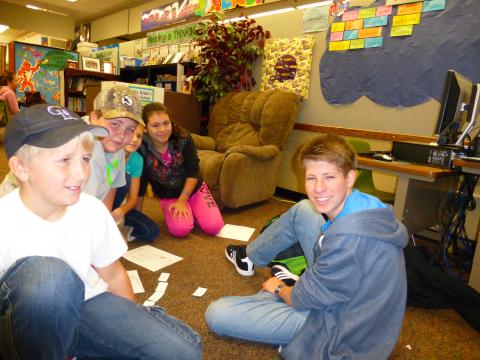 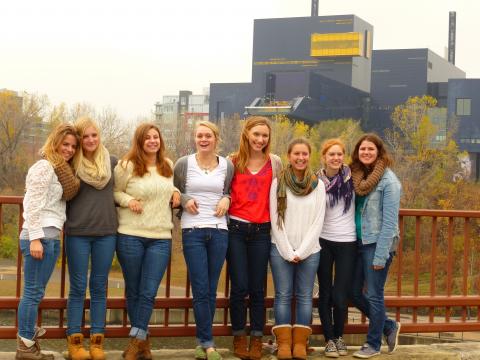 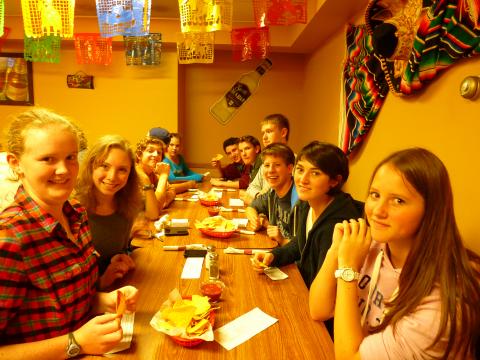 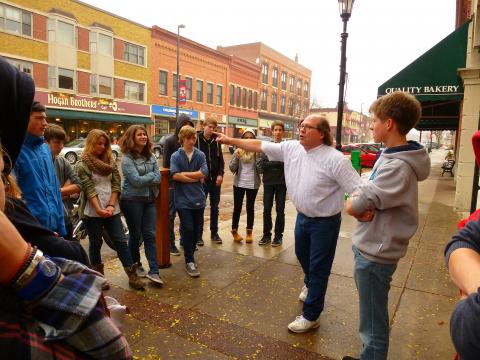 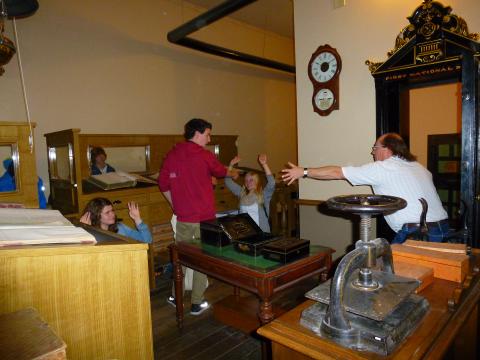 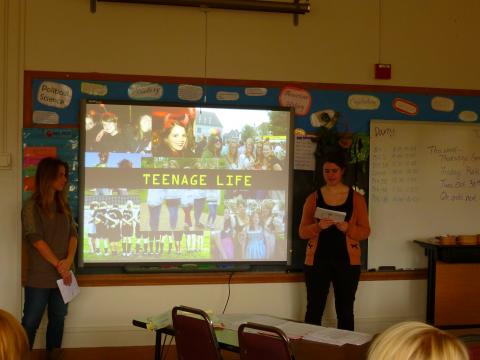 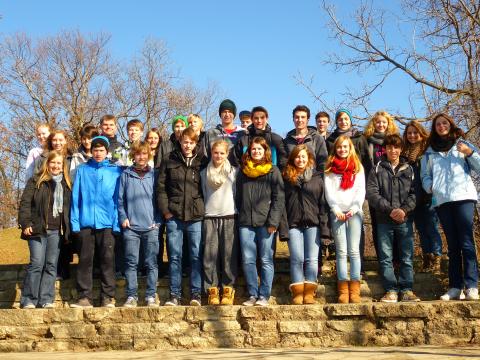 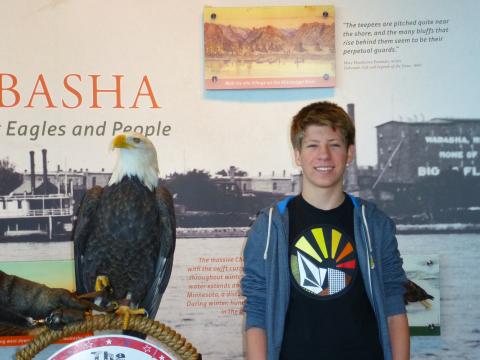