Our trip to the USA

At 8 am on Monday, 25th October, we met at the train station in Offenburg in order to catch the ICE to Frankfurt airport.

This ride was very good because we had our seats booked so we didn?t have any stress with our luggage. But then at the airport the trouble began: we arrived at about 10 am, but could only check in at 11.30 am. So, we had to wait one and a half hours to check in. When checking in, the person in charge, told us that our plane will be late. So, we had about 4 more hours to wait at Frankfurt airport. But that was not the only problem at the airport: Some students were told that their ESTA wasn?t accepted and they had to pay and fill in a new one.

At 3.30 pm we were allowed to board the plane. The horrible flight began: we had a lot of turbulences and everybody who was trying to get some sleep woke up because of that. But the meal was very good in the plane ; first we had to choose between chicken or lasagne with salad, crackers and a dessert. It was very delicious. During the flight everybody did something different to let these 9 hours pass as soon as possible. Some students slept but it was almost impossible to sleep a lot because of the little space and the noise of the plane. At 12.30 in the night we got pizza and landed at 1 am in Chicago.

The problems were not completely solved, because our plane to Chicago was that late that we almost missed our connecting flight to Minneapolis. First of all we entered a hall and were checked by the security. They asked some questions like: What are you going to do in the USA? How long will you stay here? Do you anybody else apart from your host family? After that, they checked our fingerprints. Then, we had to do another check in and needed to pass the securities to get to the baggage claim. This process took a lot of time so that we had to run to the other gate.

The second flight only took us 45 minutes but these 45 minutes were horrible too, we had got a lot of turbulences and the plane was a very little plane and I think almost everybody was concerned about the safety of this plane. But it took us only 45 minutes and we got something to drink so it was okay.

The highlight was still to come: Four bags were lost in Chicago. These students whose bags did not make it to Minneapolis were very sad because none of them had anything to change in their hand luggage.

After the second flight and the disaster being solved with the luggage, we had to drive 45 minutes to Northfield and we were so glad and happy to meet our host families. They were waiting for us at Northfield High School when we arrived and took us home. Everybody was tired but couldn't wait to talk to their exchange partners and to get to know the new house. Nobody slept as much as he or she should have, so we were all very tired at school.


Finally, we could say that the trip was very tiring but we have very nice host families, so that this doesn't matter any more. They are all very nice and to those who had lost their luggage they gave clothes for the next day and everybody is very happy to be here and we probably will have a very good time in our host families and in the USA.

After a short night, we woke up very tired. But we were very excited to go to the Northfield High School. In the fist hour, we had a meeting with all the German students and the German teachers. We compared our first impressions about America. After that, we followed our exchange partners to their classes. The American subjects are completely different than the German ones. For example, there is a subject called first aid?: students learn to cope with difficult situations in every day live. We joined this first lesson, the students learned and practised first aid.

Furthermore, there is a subject called sports medicine?,this suject is like a mixture of biologie and sport

After school everyone had to sleep a little bit. When we woke up, we had a tasty dinner in our host family. At seven o?clock everyone (partners and host family) met to celebrate our arrival in Northfield. At the Welcome Party we were offered icecream and different American topings like brownies, hot chocolate/caramel etc.

"To break the ice?, we played a game where one student had to stand in the middle of the circle of students and say something like "I like people who?(e.g. holidays)? Then, everyone who agrees with that, had to change his or her place with another student. So the person standing in the middle changed in every round.

We spent the rest of the night in our host families, watching TV, taking a shower or going to bed early.

On our fifth day here in Northfield, we began to do our presentations, but as every morning, we had a homeroom prior.

Talking about the presentations and the weekend plans

First of all, Mrs. Dörner and Mrs. Leist told us that the groups that do their presentations at other schools have to meet 15minutes before the presentation starts on the parking lot near room H110. Some of the American students? parents agreed to bring the students to these other schools and to pick them up again after the presentation?s end. Konstantin and Nicolas already had their first presentation at the 1st hour of school and at that point Mrs. Leist had to leave the meeting with the ?German Traditions? group. That was another point Mrs. Dörner told us about: Either she or Mrs. Leist join a group to see their presentations in class to give a feedback.

We used the time that was left to talk about our plans for the weekend. Everyone told the group that he or she would leave for the ?Mall of America?. Some students had the plan to watch the football match on Saturday and some others said that they were going to go to an amusement park or to a museum.

The ?Teaching German? group consisted of Max, Emilie, Pia and Simon met with Mrs. Dörner in front of H110 after lunch to start out. We were expected by Mrs. Amundson and her "2nd Grade Compañeros?. It?s a class that learns Spanish. We started our presentation with showing and practicing a little dialogue in German. The kids were interested but it was a bit hard for them to follow us at the beginning. When we continued with some animals, their excitement was on a high level, maybe because of the fact that we drew some colorful pictures. After learning the German names of the animals, the kids played a game we prepared for them to keep the German vocabulary in mind. The goal was to find out the right order of snippets so that the pictures of the animals weren?t messed up anymore. From minute to minute it became easier for us to teach the "Compañeros? because they were very nice and participating all the time. We only had the time to show them the German words for colors in the following class, but we sang the song ?Head, Shoulders, Knees and Toes? in English and of course in German with both of them. Our dance together was very funny and the little kids learned the bodyparts by singing and dancing. Then, the kids asked us some questions like ?How did you come to Minnesota from Germany? or how to count to ten in German. After the question time we had to say ?Tschüss?. 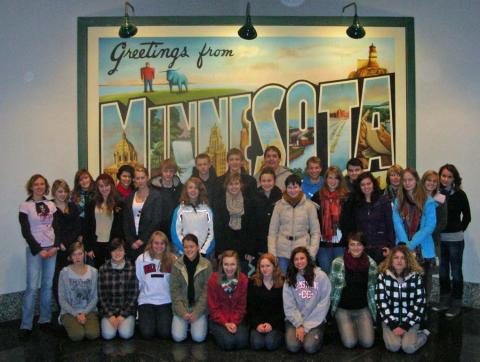 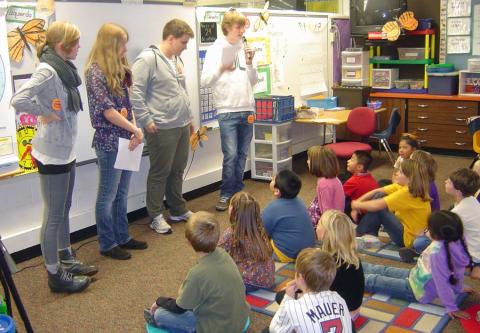 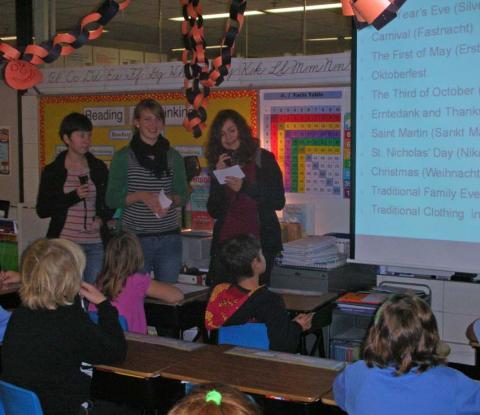